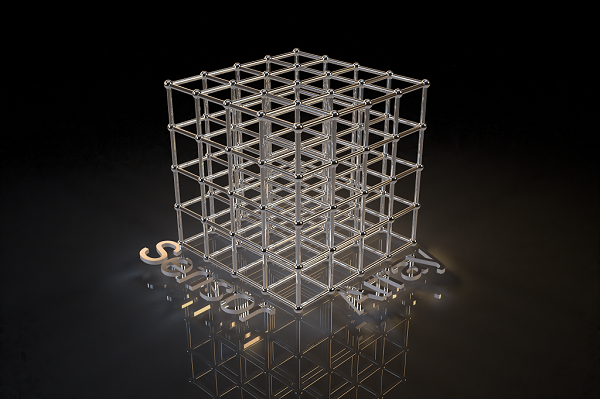 The Development of Sensor Arrays

The detection of gases in urban and industrial environments is important. It ensures that people can work in a healthy and safe environment. For almost every gas there is a gas sensor that can detect and determine the concentration of the gas. In an ideal world the response of a sensor would only depend on the gas concentration of the component in question. In this situation the detected signal SA by sensor A for component A would look like:

Where SA is the measured signal by sensor A, k_AA is the response factor of the sensor A too molecule A and [A] is the concentration of molecule A. 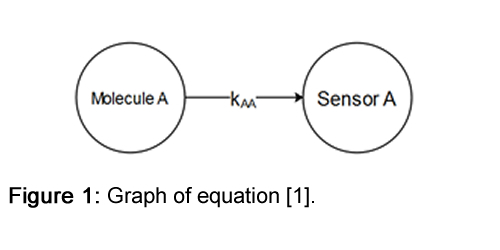 Most sensors that have been developed show a linear relationship between the concentration of the substance and the signal strength, if not the signal is linearized . In reality the response of sensors isn’t ideal since they can react with different components and is affected by changing temperature, humidity and pressure. The influence of the temperature, humidity and the pressure on the measured signal is beyond the scope of this article.

The reaction of the sensor to different molecules is called cross sensitivity. If we have for example two molecules A and B the response of the sensor A can be described as: 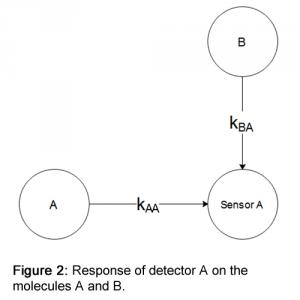 In the ideal situation kBA, the response of sensor A to molecule B, is zero. If the value of kBA isn’t zero there is a problem. It isn’t clear anymore if the sensor is responding to molecule A or B. If we have no information except the signal strength coming from the sensor the solution of [2] is a line. For most applications this isn’t an acceptable solution. To overcome this problem Ravebo B.V. is developing a sensor array. The main idea behind the sensor array is to develop a system that can use relative cheap sensors while still measuring the concentration of the different components with great precision. The sensor array consists of a number of sensors equal to the number of gasses available and the matrix K that compensates for all known cross interferences.

The matrix calculation looks as follows:

Where S is the response vector of the sensors, K is the cross interference matrix and c is the concentration vector.

If the matrix K has an inverse K_inv we can solve equation [3] for c.

So the main problem of finding the true concentrations c has been reduced to finding the matrix K and its inverse.

To determine the matrix K the following procedure can be used.
Determine the gasses available in the gas matrix. In our example we will use the gasses A, B and C. The creation of a graph is normally a good starting point to visualize the different interactions. 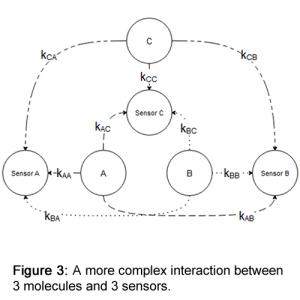