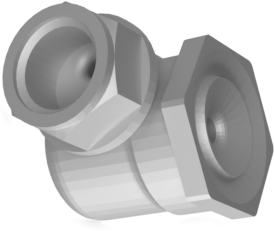 A relatively large amount is unknown to many engineers with regard to the underlying technique and the applicability for each application behind the nozzles. The principle is generally clear, but when it comes to the choice of the ultimate spray nozzle for the application, it is often not known that the end result is determined by details.

To create some clarity in this, background information is described here. The overview is not complete and is especially not intended to be able to make a choice for the right spray nozzle based on the information provided. For questions or technical support, it is advisable to contact one of our engineers.

There are many types of liquid nozzles for as many applications; ranging from agricultural applications to all kinds of industrial applications.  It goes too far to cover all types, characteristics and their purposes in this article. We will limit this here to the spray nozzles for industrial use and then in particular those types that find their application in gas scrubbers that are used for gas cleaning to prevent emission of (harmful) substances.

The nozzles that will be reviewed here are models and embodiments and applications that function on the basis of one medium and only liquids. This overview will certainly not be complete, but is mainly intended to provide an explanation of the types described. The selection and layout of the nozzles is done on the basis of the spray image. This is because the spray pattern often determines the application and its characteristics. The types of nozzles that are regularly used are the following: 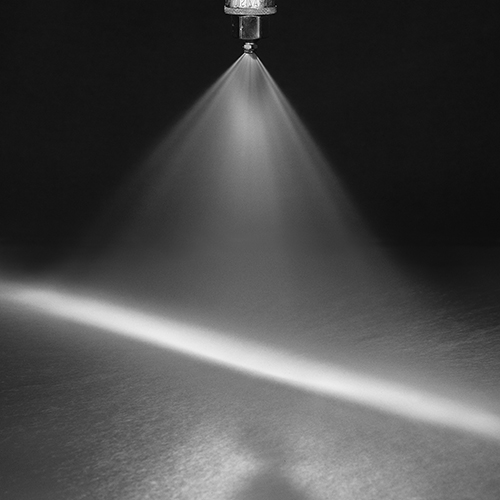 The spray pattern of flat jet nozzles looks like a sharp line which is caused by internal flow characteristics. The liquid distribution is determined by the shape and size of the nozzle. The spray pattern is a liquid film directly in front of the spray nozzle and will turn further away from the nozzle into many droplets. Because of this last property, flat jet nozzles are extremely suitable for surface cleaning. This type of sprayer is therefore used for the high pressure cleaning systems.

This type of spray nozzle is quite popular because of a very important property namely: droplet size. Hollow cones produce finer droplets than any other types of hydraulic nozzles. The main advantage of fine droplets is that the surface of all accumulated droplets is huge in relation to the other types mentioned. This feature is especially important in the following applications:

There are two types of hollow cone nozzles; axial and tangential entry. The incoming liquid flow in axial nozzles is in line with the connection where the liquid in the nozzle is brought into rotation by a specific swirl body. This rotating liquid  flow is then sprayed into the environment through a nozzle opening, creating the shape of a hollow cone. Axial hollow cone nozzles create the finest droplets of all types. Tangential (or eccentric) hollow cone nozzles are much simpler in construction than the axial nozzles. A tangential incoming liquid flow brings it into rotation so that the cylindrical inside of the sprayer is provided with a liquid film which affects the size of the droplet. When the liquid film is squeezed out of the sprayer through the nozzle opening, a cone-shaped spray image is created. Eccentric hollow cone nozzles are much less susceptible to clogging than axial types due to their lateral entry and therefore the lack of a swirl body. Because of their homogeneous spray pattern with the fine droplets, the hollow cone nozzles are mainly used by Ravebo in gas scrubbers and quenchers. 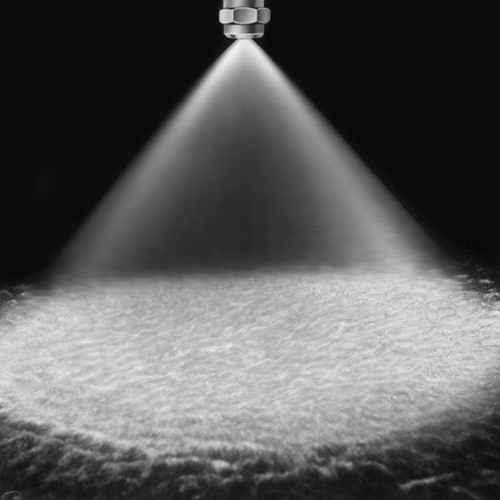 The main nozzle parameters are:

Effect of the  specific mass on the atomization

As the specific mass of the atomized media changes, so does the flow rate. To give an example, the volume flow rate decreases when a medium with a higher viscosity is atomized. In that case, the new flow rate can be calculated using the factor "x" in the formula below.

ρm  = specific mass of the medium to be sprayed

Vw  = flow rate of the water

Vm  = flow rate of the medium

Viscosity is a measure of the resistance of a liquid to deformate under frictional stress. This is based on friction between molecules in the atomized liquid. It is generally seen as "thickness", or resistance to casting. Viscosity describes the internal resistance of a liquid to flow and can be considered a measure of liquid friction. The greater the friction, the tougher the liquid. This means for the spray pattern that the spray angle and the droplet size are subject to viscosity changes. Nebulization means the transformation of a liquid into small droplets by acceleration. The inner friction represents the resistance of the liquid to deformation. If the atomized liquid has a higher viscosity than water, the droplet size diameter becomes coarser. There are two possibilities how this effect can be reversed to improve the spray image and droplet size when misting liquids with higher viscosity than water.

At 200 mPas, the atomization must be supported by the use of compressed air in so-called pneumatic nozzles to achieve sufficient droplet formation and distribution. The spray image is strongly influenced if the viscosity value is more than 500 mPas. There are no more fine droplets, but liquid jets. There is no good way to atomate liquids at viscosity values above 2,000 mPas.

Often there is confusion about the meaning of these three terms. But there is a clear connection between all  terms, which can be described using a small formula:

Influence of temperature and surface tension 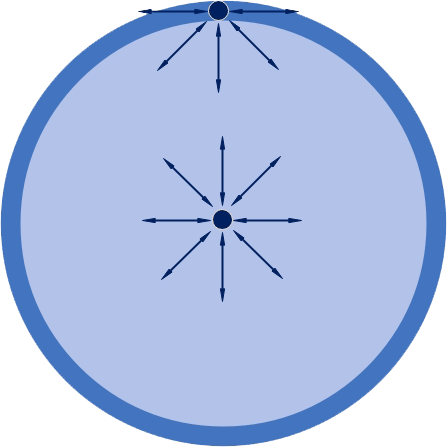 Both parameters have a negligible influence on the atomization. Temperature becomes important when misting viscous liquids. Atomization only works well within specific limits of the viscosity scale. These restrictions can be shifted by increasing the temperature of the viscous liquid, since a higher temperature causes the visibility to decrease. In physics, surface tension is an effect within the surface layer of a liquid that causes the layer to behave like an elastic plate. Surface tension is caused by the attraction between the molecules of the fluid, due to various intermolecular forces. In most of the liquid, each molecule is drawn equally in all directions by neighboring liquid molecules, resulting in a net force equal to zero. On the surface of the liquid, the molecules are pulled inwards by other molecules deeper into the liquid, but there are no liquid molecules on the outside to balance these forces, so the surface molecules are subject to an inner force of molecular attraction that is compensated by the resistance of the liquid to compression. There may also be a small pull to the outside caused by air molecules, but because air is much less dense than the liquid, this force is negligible.

Surface tension ensures that liquids form a minimal surface without the influence of external forces. That is the reason for the coherence of drops in a circular shape. The surface tension is measured in newtons per meter [N/m], is represented by the symbol α or Ɣ or Ţ and is defined as the force along a line of unit length perpendicular to the surface or force performed per unit area. To produce drops, it is necessary to break the line between these intermolecular fluid forces in order to increase the potential energy of the liquids. After the atomization, this energy is stored in a multitude of droplets with an overall surface that is much larger than before. In spraying technology, this is carried out by the pump. 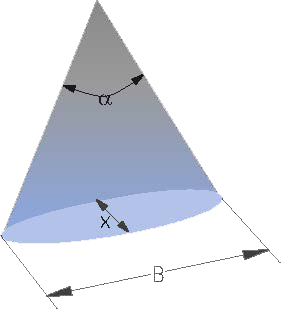 The spray angle is determined immediately after the opening of the nozzle. At higher spray distances, it is advisable to use the spray width diagrams based on measured values.  The aerodynamic resistance, the friction, the working pressure and various ballistic influences have consequences on the spray pattern and the sprayed surface. The spray width is not proportional to the pressure. By increasing the pressure, the spray pattern first becomes wider and then narrower as the pressure increases further. This is typical for most types of nozzles.

As soon as droplets leave the nozzle, their route is carried out by a horizontal and a vertical force component. The gravity F and the force Fi, generated by the working pressure, form the total force to the vertical axis. The horizontal force Fix is generated by the impulse in that direction while leaving the opening of the sprayer. The trajectory of the droplet is determined by the resulting force FR. With greater spray distances, the influence of gravity increases. The flight gradient becomes steeper. The theoretical spray width deviates more and more from reality. That is why it is advisable to use measured spray widths when working with greater spray distances.

Formula for determining the spray angle:

Spray force or impact refers to the overall force of the spray jet, which affects the sprayed surface. The impact is measured in [N/mm2]. When performing impact or impact distribution measurements, a highly sensitive sensor passes through the spray jet at a predefined speed. The sensor data is transferred to a computer where the data is processed and stored. The effect distribution measurement shows the uniformity of the spray force for different areas in the liquid jet. This data is very important for, for example, high-pressure sprayers. High efficiency when transforming pump energy into cleaning power is of the utmost importance.

To get a very efficient impact when cleaning it is important to create a very sharp jet. The smaller and sharper the impact area, the better the impact efficiency. The best results can be achieved by optimizing the jet stabilizer and the nozzle opening to keep the spray depth as small as possible.

Droplets that pass through the air experience friction and slow down. Higher kinetic energy of the moving droplet (respectively, the speed of the droplets) increases the energy released when the droplet hits the surface. To maximize the impact, this means that the speed and amount of droplets per unit area must be as high as possible. The function between spray distance and surface is equal to the impact of the spray. Theoretically, the following applies: by doubling the distance, the impact area will be squared.

For many applications, the droplet size and the created droplet spectrum is essential. An accurate measuring device for this purpose is the PDA (Phase Doppler Anemometer). This device makes it possible to determine the droplet size and drop rate simultaneously. It is possible to get a full simulation of sprayer properties. Due to the inhomogeneity of the droplet spectrum, droplet characteristics can be described only with the help of specific parameters. One of the best known parameters is the Sauter diameter d32.